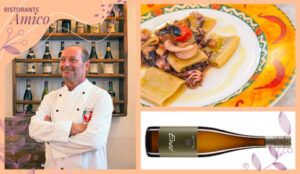 Wineries embrace restaurants. For the column “Ristorante Amico” (Friend-restaurant), a wine producer presents one of his favorite restaurants, which in return offers a recipe paired with one of his wines.

The history of Ristorante Nesis began in 1979 as a result of the passion of Chef Pietro Milo, who was born and raised in Amalfi, and a desire to bring seafood culture and a passion for fish-based cuisine to Cesano Boscone, in Lombardy.

Nesis is the ancient Latin name for Nisida, a small island in the Gulf of Naples.

The traditional cuisine of Campania is the inspiration for the Nesis kitchen, which is devoted to genuine, top-quality ingredients, above all fish – the common denominator of all their dishes. In addition, Pietro Milo loves great wine and “conviviality”.

The proposed recipe:
Paccheri with Squid, Prawns, Radicchio and Peppers

Cook the peppers for 25 minutes in the oven at 200°C; once cooked, peel and remove the seeds.

Clean the squid by carefully removing the insides, then cut into rounds and fry in oil adding a glass of white wine.

Once the squid are stewed, add the finely chopped radicchio and the prawns in small pieces.

Meanwhile, cook the paccheri in salted water for about 12 minutes. When they are al dente, drain them and incorporate them into the squid, radicchio and prawn sauce.

Add two ladles of water and four tablespoons of EVO oil. When the water has evaporated, add the sliced pepper and stir-fry.

Bright yellow color with golden reflections. On the nose notes gooseberry, peaches, pineapple and passion fruit. On the palate, it reveals a lively flavor full of finesse, briny texture and juicy acidity, with citrus fruit in the after taste.

Production area: The Höfl unterm Stein farm in South Tyrol is located in Sella, above the hamlet of Termeno. Located at an elevation of 1,650 feet, the sandy-limestone soils yield firm-structured wines with superb depth yet at the same time a vivid level of acidity.

2019 vintage: The weather conditions made 2019 a challenging year for our winegrowers. A relatively mild winter and early spring were followed by a wet and cold April and May. After the flowering of the vines, which began in June, the weather changed and became hot and dry. In late summer, some rain and below-average temperatures delayed the ripening of the grapes.

Grape Harvest: started in early September and continued until the end of October.

care of the redaction

We use cookies on our website to give you the most relevant experience by remembering your preferences and repeat visits. By clicking “Accept”, you consent to the use of ALL the cookies.
Cookie settingsACCEPT
Manage consent

This website uses cookies to improve your experience while you navigate through the website. Out of these, the cookies that are categorized as necessary are stored on your browser as they are essential for the working of basic functionalities of the website. We also use third-party cookies that help us analyze and understand how you use this website. These cookies will be stored in your browser only with your consent. You also have the option to opt-out of these cookies. But opting out of some of these cookies may affect your browsing experience.
Necessary Sempre abilitato
Necessary cookies are absolutely essential for the website to function properly. These cookies ensure basic functionalities and security features of the website, anonymously.
Functional
Functional cookies help to perform certain functionalities like sharing the content of the website on social media platforms, collect feedbacks, and other third-party features.
Performance
Performance cookies are used to understand and analyze the key performance indexes of the website which helps in delivering a better user experience for the visitors.
Analytics
Analytical cookies are used to understand how visitors interact with the website. These cookies help provide information on metrics the number of visitors, bounce rate, traffic source, etc.
Advertisement
Advertisement cookies are used to provide visitors with relevant ads and marketing campaigns. These cookies track visitors across websites and collect information to provide customized ads.
Others
Other uncategorized cookies are those that are being analyzed and have not been classified into a category as yet.
ACCETTA E SALVA